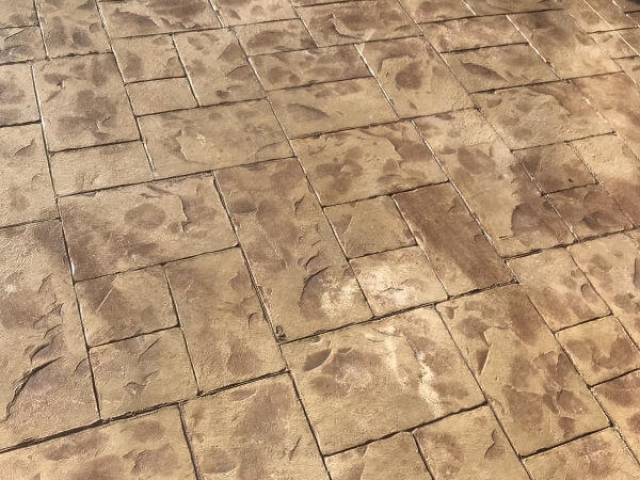 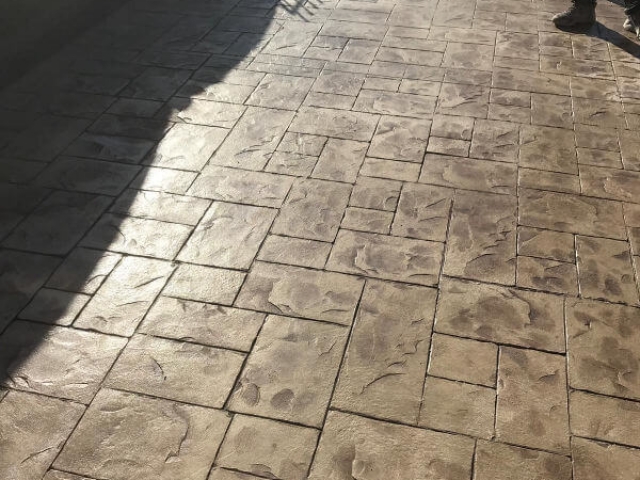 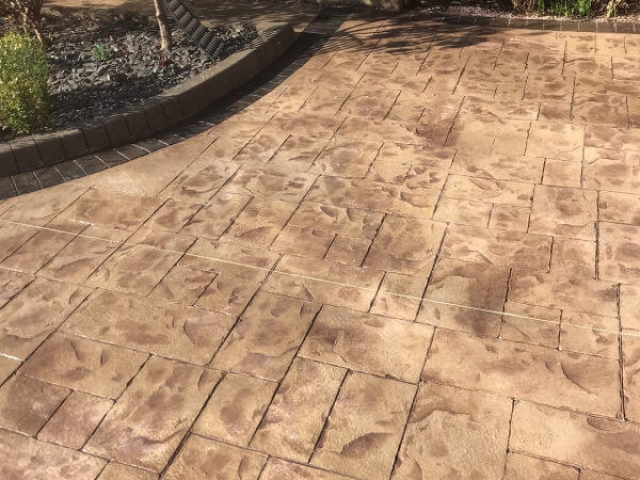 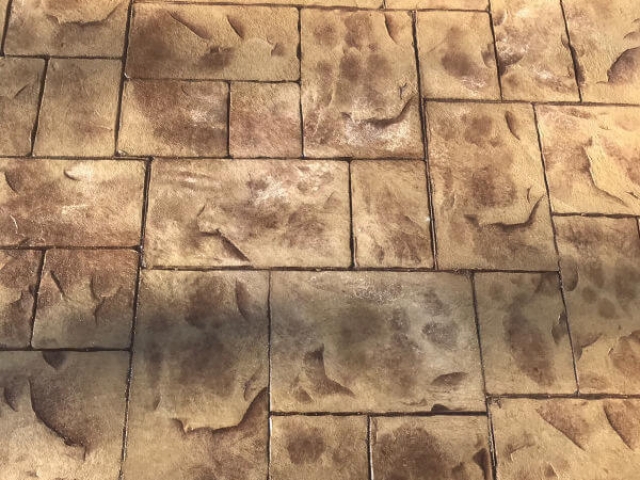 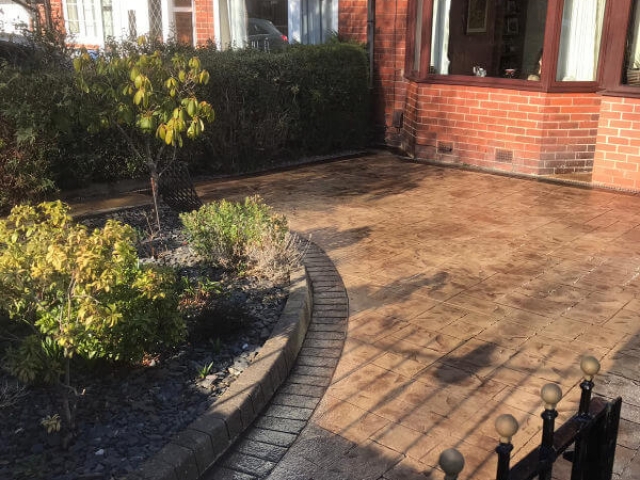 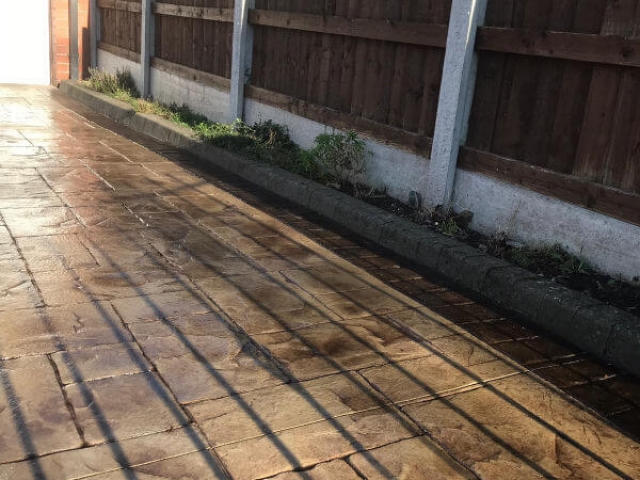 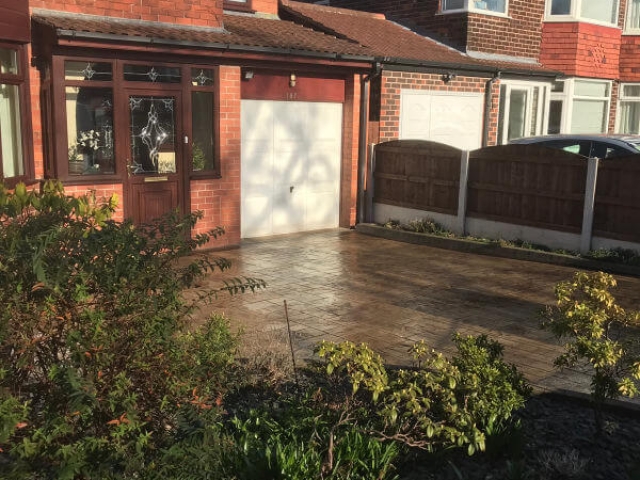 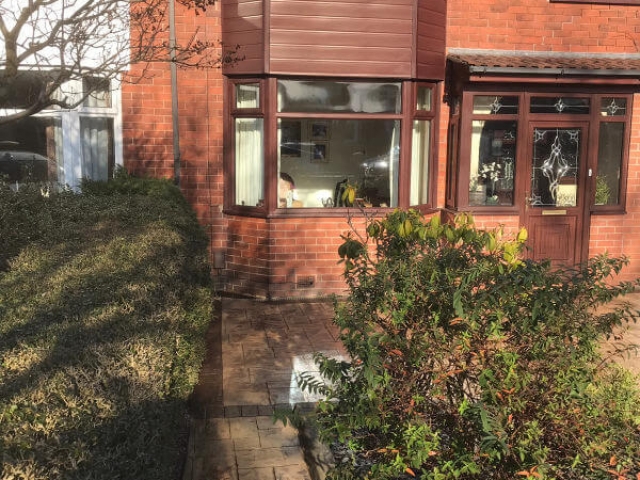 While pattern imprinted concrete has many benefits such as the fact that it is low maintenance, easy to clean and weed free, after a few years, as with most things, it can start to look a little jaded. The weather, the salt from the roads and frequent traffic, along with general wear and tear can have an impact on its appearance and durability.

A regularly used driveway with cars driving on and off it every day will need to be resealed every 2-3 years, however a patio can last as long as 5 years before needing a reseal. While the pattern imprinted concrete might appear dull or the colour is not as sharp as it was and has faded over time, these issues are all easily rectified! Similarly, oil stains can be removed, and frost cracks and crumbling edges can be repaired.

Driveway Resealing recently resealed a driveway and path at the front of a semi-detached house. It was resealed in Steadman Buff with walnut release. To begin the process, we jet washed the driveway a few days before we were due to add the sealant to ensure that there was no dirt on the surface and any grease or grime was removed. We used a mild acid and algae cleaner as part of this. We then left it to completely dry out.

We returned to the house a couple of days later on a dry day with a xylene wash to burn off the old seal and then proceeded to reseal the driveway with a coat of high solids seal with anti-slip. You can see from the photographs what the driveway looked like before and after having the new sealant applied.

Resealing a pattern imprinted concrete driveway always brightens and sharpens the colour. Rather than being dull in appearance it recreates the shine that it originally had restoring it back to how it originally looked when first laid. This keeps the surface in optimum condition ensuring that it is not slippery and will extend its lifespan.

This website uses cookies to improve your experience while you navigate through the website. Out of these, the cookies that are categorized as necessary are stored on your browser as they are essential for the working of basic functionalities of the website. We also use third-party cookies that help us analyze and understand how you use this website. These cookies will be stored in your browser only with your consent. You also have the option to opt-out of these cookies. But opting out of some of these cookies may affect your browsing experience.
Necessary Always Enabled

Any cookies that may not be particularly necessary for the website to function and is used specifically to collect user personal data via analytics, ads, other embedded contents are termed as non-necessary cookies. It is mandatory to procure user consent prior to running these cookies on your website.